much of this is a big ol' WORK IN PROGRESS:3

this era spans a time of the web from the late 90's to the late 00's, though much of the examples i will be talking about will be focused on the early to mid 00's (around '03 to '07). i will like to eventually go over how these aesthetics have changed over the years, from the early days of HTML (sailor moon fansites) to the rise of wordpress blogs in the later 00's - which, coincides with the decline of the personal web when social media like myspace+facebook is introduced.

if you're familiar with the old web then this isn't news to you:

the early internet was much more of a wild west than it is now. instead of the 'big three' social media sites everyone is on, the early web was profilerated by tech enthusiasts and hobbyists. having your own website was like having your own address, your own home on the internet. it wasn't uncommon for your ISP provider to give you your own small server to host your site on, but there were also free web hosts like geocities, angelfire, tripod, and freewebs, among others. sometimes those with a server would host spaces for their friends. like tilde servers, you might see a bunch of personal sites with the same domain, like celestial-pop.net, celestial-pop.net/~ash/, celestial-pop.net/~stef/ and so on.[1]

a personal website was usually handwritten with html and css, and sometimes used javascript + php. this was a space for you to express your personality and share bits of your life. graphics became an integral part of the personal web in order to ~spice up~ your page and make it stand out from others. there were websites dedicated to gifs, and graphics started to become a commodity. most of it was pixelated - representative of a time of smaller screen resolutions like 800x600 or 1024x720.[2] pixel art was simply much easier to see, in contrast to how TINY they appear on much more modern resolutions. (if you're wondering why everything is so TINY, well, thats why!).

like most of the demographic of the early web, many people got their start learning html through neopets, which provided tutorials on customizing your own pet pages. seeing as neopets targeted a much younger audience, this is how many people got their start! there were also games like the petz series which also provided templates for making websites for your catz/dogz. however, i believe it was neopets which really helped the natural evolution of web culture online. people started creating layout templates to be shared and graphics you could use to spruce up your pet pages. this would extend to seperate websites dedicated to providing materials for your pet pages.

the cuter side of the web was mainly dominated by young women, with websites being made by teens as young as 12-14, up to mid-late 20's women, usually students or already in the work force, as well as being international[3]. these personal sites typically had hand-drawn, meticulously designed pixel layouts. these sites usually showcased self-made pixel art and showcased pixel art made by other webmasters. the love of cute things, sanrio, and pink created it's own subculture! while lots of these web-isms will reflect what was common during the early web, there are quite a few things unique to the cuter side of the web.

what is the kawaii web?

kawaii, the japanese term for cuteness, is a much larger concept than i will attempt to cover here. it generally refers to a culture, fashion, and consumption of cute things (like characters and character goods). kawaii can invoke many feelings, but arguably a sense of comfort. it can also be seen as a response to hard times. there are many subcultures within the kawaii culture as well which make it a diverse subject~

i'm temporarily coining this pocket of the early web as the kawaii web. i've also heard the term pixel playgrounds & femme web[4] thrown around. however as far as i'm aware, there is no general consensus for what to call it.

the kawaii web as i refer to it, encompasses a web culture that saw the height of popularity in the 00's. they consisted mostly of personal hand written websites, websites that acted as resources to find similar sites & materials for your own site, forums and fansites/cliques are included in this category as well. the main factor of this part of the web is the creation and trading of cute commodities.

commonly called "adoptables", or adopts, these were pixel art of characters, objects, etc that were created and hosted on a site for other people to "adopt." when a graphic was adopted, it was put on someone else's website in a collection of adopts called a "toybox". toyboxes were akin to sticker collecting, but also a great way to find new websites. this was a popular form of pixel trading.[5]

curating your own toybox was a way to express yourself and enjoy the kawaii-ess of it all. cute graphics were sought out for to decorate one's email, website, profiles, or online self. pixel trading extended to other 'trends' like dolls and cliques, which vary by theme but are functionally the same: provide a template for a design and have others draw their own creation using that template. as a result you can showcase your own creations and other people's creations & link back to them. this was a fun community building aspect of the web.[6]

personal sites of the kawaii web had very bold designs. bright & pastel and very pink. website layouts were constructed like physical spaces. divided into sections of "me", "you", and "site". respectively these sections would contain more subsections for content about yourself, your toybox, then graphics you've created for others to collect, quizes or fun ways to pass the time. the 'site' section was where the housekeeping was done. buttons were a way of advertising your site to others. since the web was more decentralized at the time, webmasters usually posted links to other sites that they enjoy and through these links a loose network is created. forums & blogs further strengthened the communal aspect of the web.

kawaii web also has the tendency to borrow some japanese words - kawaii, ichigo, neko, etc when it comes to naming conventions for character or website names. a kawaii website will typically have a proper title, which may or may not relate to the site's URL (especially with sites that have shared hosting. example: http://www.astro-pop.net/hannah/ calls her site "giggling gumdrops'.) common URLs will convey a cute feeling, usually alluding to animals, magic, deserts, rainbows, sparkles, clouds, hearts, or a general softness. examples of URLs include, but are certainly not limited to:

the influence of japanese culture on the kawaii web can also be seen through the images of japanese foods - sushi, mochi, parfaits...#wip

anatomy of a cute face

a cute face generally has big eyes relative to the mouth, though small eyes are cute as long as the face stays pretty 'squished'. i've tested that the closer the mouth is to the eyes, the cuter it is. therefore, with the mouth align with the eyes, it is pretty stinking cute. 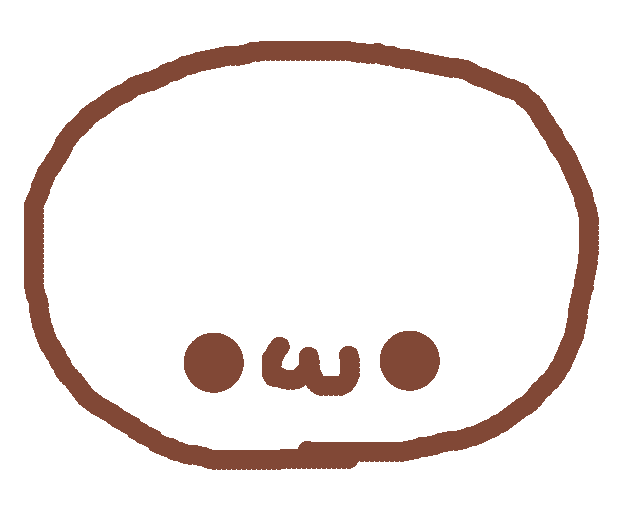 while you can slap the cute face on anything and it will be cute, for maximum cuteness keep in mind the face proportions to the head. the face compared to the head is much smaller, and is placed lower at the bottom to emphasis the big-headedness.

excuse the title for now..

this part will act as a dictionary/guide to explain certain terms or concepts you may come across in old web.

in order to find other websites, it took more work to stumble upon something you will like. you had to surf through links and go down a rabbit hole. a website usually had links to websites they liked - and if you followed those links you will find more sites with more links! thus, concepts arose like...

affiliates, affies, or sister sites. in this context, it refers to two sites mutually linking to each other. affies can be closed to close friends or you could also apply to be affiliates with another site.

these two concepts are very similar though have slight aesthetic differences. the idea is: a group of sites connected by a shared theme link to each other. a webring, theoretically, lets you surf through sites until you go down the list and reach the beginning, like a ring. a webring on a site usually has a link to go forward/back in the ring, a random site on the ring, and a link to the host of the webring. a link exchange (sometimes called a link rotation) works in the same manner, though you will often just see a link to the host of the exchange & a random site. for both it is crucial for every site to have the script in order for it to function correctly, lest it breaks a ring.

a link directory is a list of links, typically centered around a theme and further divided into subcategories. this was helpful to find sites of a particular type you were looking for - links were either stumbled across naturally or submitted by users. a topsite acts functionally very similar to a directory, however the difference is a voting system which would bring links higher up the list. more votes = more popularity. you might find a personal site asking you to vote for their site :)

[1]: replace these with actual examples :)

[4]: i sort of feel like femme web is too general of a term for this concept so i won't use it very much. i would argue the focus on cute commodities is more inline with kawaii culture

[5]: adopts were usually of popular characters of japanese brands like sanrio, san-x, q-lia, etc. also popular was the phenonemom of creating your own characters - designs usually adopting sanrio/san-x sensibilities ^-^. besides characters, animals and objects, sometimes combined, were the usual. food with cute faces, a rainbow of sparkly pens, etc.